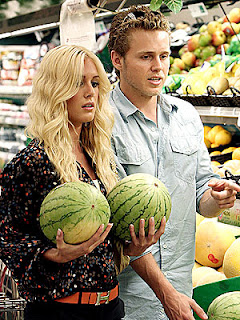 Heidi Montag and Spencer Pratt have admitted to Life & Style Magazine that their divorce was a sham, intended to position them for a lucrative British reality show.  We thought we’d take the opportunity to reprint a piece on their reunion.  Enjoy!

Staying Married for the Gifts

I have never seen Heidi Montag and Spencer Pratt in action.  However, reading about crazy celebrities in trashy magazines is one of the carrots that gets me into the gym, and these two appear to have adopted celebrity magazines as their principle marketing channel.  Therefore, I cannot claim I’ve never heard of them.

So here’s what I know.  They were on a reality show.  They got married in Mexico, and it caused a lot of drama, but it wasn’t real (I mean the marriage, and probably the drama – I do not question the reality of Mexico).  Heidi had a lot of plastic surgery – most of it on a single day – and now has G-cups (?!?).  The media has bestowed on them one of those couple names that emphatically underlines their omnipresence on the paparazzi beat.

And now they’re back together.

The media uniformly relay word of their reunion as if it were a brief remission from an otherwise deadly and disfiguring cancer.

At the time of their separation, Spencer confessed to prioritizing publicity over everything else and credited Heidi with wanting the same calm life of hiking and relaxing that any girl-next-door-sporting-G-cups is looking for.  Last weekend Spencer and Heidi burned their divorce papers, with Spencer explaining that he never expected his asshole behavior to drive his wife away.  But now that he knows, he’ll work on it.

As hard as it is to believe, “I didn’t know that my asshole behavior was a deal breaker” is actually a pretty common defense.  Sometimes it leads to permanent behavior change, and sometimes the behavior changes just long enough for you to put the suitcase back in the attic.  So good on Spencer for picking something universal and believable!

But I don’t believe it.  Speidi has nothing to offer us except their celebrity and their ensuing presence in reality television.  Hence the title of Heidi’s first book:  How to Be Famous: Our Guide to Looking the Part, Playing the Press, and Becoming a Tabloid Fixture.  Or, as Spencer eloquently expressed it, “I’m a famewhore.”

And they’re sponsored!  Go to Heidi’s Facebook page or website, and you’ll see it’s peppered with nothing but product endorsements.  Subtle enough that she doesn’t have to disclose that she was paid for them, but unavoidably obvious when you view them in their totality.  Holy crap.  I’m guessing most of these companies pay her in kind rather than in cash.  If she has any brain in her head at all, that Heidi is one of eBay’s hottest sellers.

Which brings us to Heidi and Spencer’s marriage/separation/reunion/eventual divorce.  I don’t believe there was any marital discord.  I mean, sure, you and I wouldn’t have been able to put up with either of them for more than half an hour.  But I gather Speidi is more like those less intelligent dogs who are too dumb to get bored when you leave them in their crate all day while you’re at work.  Instead, I think it’s all part of a grand narrative they have painstakingly scripted for the tabloids.  Which keep printing their stories.  And which continue to be bought by readers – or their gyms and hairdressers.  We’re in a double-dip recession, and this stuff still sells.

OK, so maybe Speidi is slightly smarter than the dumbest crated dog.

Posted by Breakup Watch at 9:33 PM

Your blog is definitely the new People for me! and it's well written, too, unusual in blogland. Thanks for it.

Boud, Thank you for the positive review.