This breakup happened several months ago, but is just heating up now as the two ex-lovers pummel each other in court (and in the media) over custody of their daughter Nahla.

Her side:  Gabriel is a lazy, unemployed mooch who can’t be trusted to care for his daughter.  He’s a racist who’s uncomfortable with the thought of having a “black” daughter.

His side:  Halle is more interested in her career than being a mother to her daughter.

But the breakup started out so well!  Gabriel continued to live in Halle’s house, where he could see Nahla every day.  Post-relationship relations were so friendly, the parents neglected to arrange a formal custody agreement.  A lapse Halle is probably regretting today.

The truth is almost certainly more benign than all the accusations.  Halle’s maternal instinct drives her to seek primary custodianship of her daughter.  And she can’t be thrilled at the prospect of contributing to her ex-boyfriend’s upkeep in the form of child support.  Gabriel prefers that Nahla be cared for by her parents; if Halle’s off making the moolah on a movie, then that leaves him, doesn’t it?  And it’s clear that both parents feel threatened by the prospect of identifying Nahla by the race of their ex.

Basically, Halle is facing the dilemma typically faced by wealthy men who divorce their SAHM wives.  For some, the stay-at-home arrangement made sense when they were married; others resented it all along.  In any case, these hard-working men object to financing the livelihoods of their ex-wives.  Sometimes they seek to remedy the situation by petitioning for sole custody, challenging the traditional bias for children to remain with their mothers (a bias which is being overcome by the growing popularity of 50-50 custody arrangements).

In Halle’s case, there’s the ironic twist that she’s both breadwinner and mother.  For her part, she probably feels doubly entitled to sole custody.  Now that she has a new boyfriend, perhaps she’d like to relegate Gabriel to the lowly status of very attractive sperm donor.  It doesn’t look like Gabriel is going to stand for that.  He will probably continue to lobby for his continued presence in Nahla’s everyday life.

Perhaps Halle can learn from Britney Spears.  Britney chose to bring her ex-husband on tour with her rather than leave her children behind or separate them from their father.  Thus the world witnessed the extraordinary sight of K-Fed the “manny.”  Think about it, Halle and Gabriel!

picture credit
Posted by Breakup Watch at 8:18 AM No comments:

Ripped from the Onion Headlines: Man Lies About Age, Marital Status in Response to Personal Ad 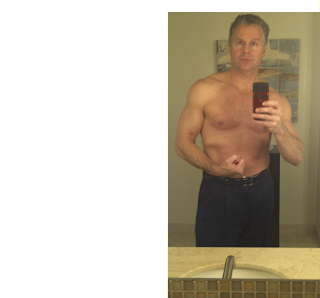 People have been lying about themselves in personal ads since the dawn of personal ads.  Regular readers quickly learn to convert ad data into real-life measures:  Men who say they are 6’ tall are really 5’-9.5”.  Women who say they are in their early thirties are really 41.  “Adventure seekers” are basement-dwelling gamers who hope to luck into a three-way someday.  “Executives” are deadbeat dads selling Amway out of the trunk of their car.  It’s the same game wherever you go, and everyone knows it.

So it’s not terribly shocking that a 46-year-old married man responded to a woman’s personal ad on Craig’s List, claiming to be 39 and divorced.  It’s so not-shocking it could almost be a headline from The Onion.  What’s shocking is that the 46-year-old, married Congressional Representative Christopher Lee responded to a personal ad on Craig’s List, claiming to be a 39-year-old divorced lobbyist.  What’s baffling is that he used his real name, responded from his publicized personal email address, and sent a cheesecake picture of himself!  Dude!  You couldn’t make up a false name to go with all that false information?

I offer four theories on why he made such a bonehead move:

In any case, it appears that Rep. Lee nurtured the fantasy of leading a double life.  Respected politician/family man by day, debonair single power broker by night.  Unfortunately, the stupid topless self-portrait indicates he doesn’t actually know any debonair, single power brokers (does anyone?).  (Also, how many cellphone pictures do you think he took of himself before he decided that was the one to send out to prospective paramours?)

The good news:  now that his Craig's List activity has gone public, there’s a fair chance that Chris’s aspirations of being a divorced lobbyist will come true!
Posted by Breakup Watch at 11:00 PM No comments: