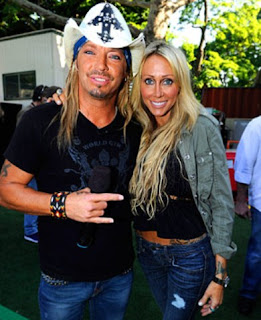 So it looks like the Cyrus marriage fell victim to something more than just a disagreement about how to market the Cyrus girls’ budding sexuality.  Or not.  It depends on who you believe.

Reports have it that Tish Cyrus had a fling with Bret Michaels while Bret was recording a song with her daughter Miley.  Billy Ray found out, and now their divorce is in the works.

Reps for both Tish and Bret deny there was any affair.  Well, of course they would.

But it’s extremely likely that everyone is right.  No “P” in the “V,” but it’s totally plausible that Tish’s relationship with Bret precipitated a final crisis in the Cyrus marriage.  Emotional Affairs, people!!!  Why do we deny them?

Meanwhile, Bret is hardly likely to take a 40 when he can get two 20s.  But he’s also hardly likely to shut down a pretty blond with a nice rack -- even if she is the mother of the jail bait he just spent the last hour with in the studio.  So, while he’s not actually interested, it’s just not in his nature to say no.
Posted by Breakup Watch at 8:56 PM

Emotional Affairs, People!!! made me laugh out loud. Why DO we deny them??