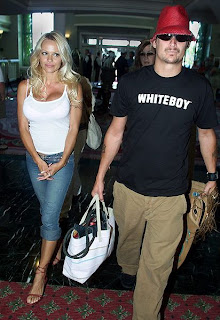 Since Pamela Anderson is making headlines with her PETA campaign to Israel, we thought we'd dig up this old piece from the Breakup Watch archives (circa 2006).  We hope you like it.


OK, first of all, let's just get it out there.  This not the sort of celebrity divorce that rocks your world.  Pam and Kid are no Reese and Ryan (or Jennifer and Brad, for that matter).  It's not like we all woke up this morning to the news and thought, "But if Pamela Anderson and Kid Rock can't make it, maybe nobody can!"  So the question isn't Why did their marriage fall apart?; it's How in the world did they end up walking down the aisle on a yacht in St. Tropez in the first place?  And in Beverly Hills in the second place?  And in Nashville in the third place?

It would appear that in her formative years, Pam desperately sought the approval of someone who had some strong beliefs about class and station in life.  For this person, members of the "establishment" (i.e., people with 9 to 5 jobs, whether in retail or banking) lead small, dull lives while thinking they're better than us.  With the blatant bosom, the otherworldly lips, the weird hats, the garish weddings, Pamela is constantly proclaiming a big F.U. to that establishment that wouldn't have her, while trying once again to earn the retroactive approval of someone from her past.

In the midst of this one woman class struggle, Pamela's driving romantic fantasy of taming the Bad Boy endures.  For Pam, if he's not bad, he's boring; and being seen on a Nice Boy's arm would amount to a betrayal of everything she values most.  Just as important, being the girl the Bad Boy falls for is the pinnacle of achievement.  After all, he's got hordes of groupies anxiously offering their bodies on his terms, no questions asked.  If you can turn his head away from that, you are truly hawt.  So for Pamela, the Bad Boy is the only boy worth having, and the Bad Boy's Girl is the only girl worth being.

And Kid Rock?  Well, he was probably just along for the ride.  I suspect that with each new wild idea, crazy getup, rowdy party/wedding she came up with, he puffed on his cigar and said, "That girl's a trip.  And check out those fun bags!"  And here the paradox of Bad Boy Love provides another reason for the multiple wedding ceremonies.  Because somewhere deep inside her, Pamela knew that she hadn't really tamed that wild animal.  She had just simulated its natural habitat and hoped the Kid wouldn't recognize their marriage as the enclosure it really was.  Let her guard down just once, and he's out again, getting free lap dances from tweaked-up high school dropouts with hopes of one day making it big in the glamorous adult film industry.

Is there any hope for Pam?  I'm not so sure.  It seems to me that her class prejudices are ingrained enough that she'll probably never completely escape them.  So her best bet is to find someone who represents the rough side of life, but who doesn't actually live it anymore.  Maybe a former Hell's Angel with 10 years of sobriety and 20 years of tattoos under his belt who now owns the Harley boutique on Rodeo Drive.  But only if he invites his biker friends over for backyard barbecues every weekend, so Pam never suspects that she's been lured away from her natural habitat.