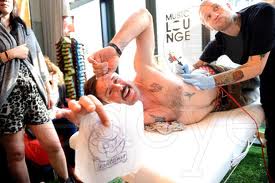 David Arquette went on Howard Stern’s radio show today and revealed that Courtney Cox is tired of being his mother.

When I first heard this, I was confused.  I imagined Courtney nagging David for leaving wet towels on the bathroom floor and making himself scarce whenever she wanted to slip out for a night with the girls and needed someone to look after Coco.  They have a domestic staff to handle those chores, don’t they?

But then I remembered two people of my acquaintance:  Alex and Lucy.  They’ve been married for many years, and have always had this weird Mean Mommy/Bad Boy dynamic that just creeps me the hell out.  She expresses her disapproval of certain vices and prohibits him from engaging in them.  He sneaks around her to do what he wants and recruits his friends to help him.  Alex acts as if he has no power in this relationship, Lucy is a controling she-devil, and he must sneak behind her back.  But he has all the power in the world to be on his own, or even to choose someone with similar tastes.  He chooses Lucy.  Something deep inside of him needs that disapproving mommy figure, no matter how much he bitches about her to his friends and random strangers.

As creepy as it is to me, Alex and Lucy have a good thing going -- for them!  Surely there are couples for whom the Bad-Boy-Gets-Caught-Being-Naughty-so-Sexy-Mommy-Must-Punish-Him scene is a healthy part of their sexual dynamic.  But for that to work, both spouses must be on board (like Alex and Lucy -- <shudder!>).  According to David, however, Courtney was not on board.  She did not get a thrill from catching him oggling other women/doing blow with Scream extras/obsessively viewing porn/staying up all night playing online poker, and then planning her exquisite punishment.   She wanted an equal partner who gave as much of himself to the family as she did.  She probably assumed that’s what she was getting, or at least that he’d grow into it.  Apparently she’s no longer so sure.  And by sharing all this with Howard Stern, David, it would seem, isn’t so sure either.
Posted by Breakup Watch at 9:47 PM