That's Mrs. Skeevy Douchebag to You!!! 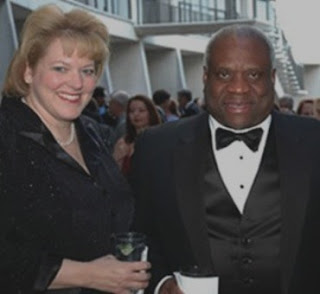 Jacob Bernstein has a great piece in the Daily Beast about how no one close to Ginni Thomas has any idea why she left a message for Anita Hill last week, inviting her to take back her Congressional testimony of twenty years ago that Clarence Thomas was a skeevy douchebag.

While Bernstein’s journalistic standards won’t allow him to engage in idle speculation on a respected site like the Daily Beast, we here at Breakup Watch are all about the idle speculation!  And here’s mine:  Ginni has long felt insecure about her place in Clarence Thomas’s heart, due to his porn addiction and random other instances of sexual acting out.  Most of the time, she keeps her insecurity underwraps, channeling it into her uber-conservative causes, desperately trying to appeal to Thomas’s interests in legal philosophy and distract him from the exploits of Long Dong Silver.  But something must have happened in the last few weeks that sent Ginni over the edge.  Maybe she heard that Clarence’s ex-girlfriend would be going public about his odd behavior?  Maybe, after a promising period of sobriety, Clarence dove off the sexual addiction wagon?

Ginni is desperate to regain her equilibrium.  Anita Hill’s accusations were the earthquake that caused the first visible fissures in the idyllic life she and Clarence were building together.  Getting Anita to take it all back would be like going back in time, preventing the earthquake, and erasing the cracks.  Ginni forgot for a moment that even when the earth’s not shaking, the fault is still there.
Posted by Breakup Watch at 11:44 AM

Could the Stupid American Cult of Celebrity be creeping into the ever staid, stodgy and respected Supreme Court? OMG!!