Catching Up with The Tudors: No Spoilers, Please! 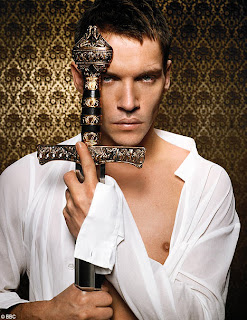 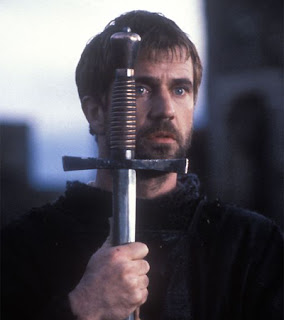 I just finished watching the first season of The Tudors.  Holy cow they had a lot of sex in 16th century England!  I love how a man could earn himself a title and an estate by not causing a stink when his wife bears the king’s love child.  It’s as if the Bill Clinton/Paula Jones/John Edwards/Rielle Hunter fiascos were blended together somehow to create an epic Win Cake.

I also love how the dissolution of Henry VIII and Catherine of Aragon’s marriage follows the universal script.  He re-writes history (I never really loved you/your previous marriage to my brother makes our 20-year marriage invalid).  He shows avid interest in hobbies and passtimes he had previously shunned (the musical stylings of Shania Twaine/Protestantism).  He screams irrational vitriol (You won’t be happy until you’ve SUCKED every ounce of LIFE out of me!!!!!/So you were a fucking virgin!  That’s NOT the POINT!!!!!).  Good times.

At the end of Season 1, Henry is still trying to divorce Catherine, and things are getting steamier and steamier with his mistress, Ann Boleyn.  So, assuming the show continues to follow the typical pattern of infidelity, this is what I expect to see in Season 2:

Henry finally gets his divorce and immediately marries Ann.  This will be the legal follow up to the “spiritual” (i.e., sham) wedding they would have celebrated among close friends and supporters before the divorce was final.  Henry will focus on his “new family” and only see young Mary every other weekend.

Catherine, if she knows what’s good for her, will start getting out more and being seen around England by mutual friends, who will report back to Henry that she looks really good.  She’s lost weight and she’s wearing her hair differently.  She’ll be seen laughing and smiling, and word will go around court of what a smart, funny lady she is, and how could someone walk away from that?

Every time Henry and Ann hear a story about how well Catherine is doing, they’ll ratchet up the extravagance of their own relationship until it nears hysteria.  Loud parties, flashy bling, exciting raids on monasteries, and the like.  But behind the scenes, tension is rising.  He feels like her family is always always underfoot.  She thinks he admires her ladies in waiting too much.  For a while, the sex will still be good enough and frequent enough for them to ignore the problems.  But eventually the bloom will fall from that Tudor Rose, and Henry will find it near impossible to be civil in Ann’s presence.  “I left my wife because we had no spiritual common ground,” he’ll shout.  Ann will be surprised to find herself thinking nostalgically of the days when Henry and Catherine were still married, and Ann and Henry were so very much in love.  At some point, she’ll discover that Catherine continues to communicate with Henry about their daughter and various business matters.  Henry chafes at Ann’s questions and finds her insecurity exasperating.  In their ugliest fight, Henry hits her while she’s holding their daughter.  Nobles at court debate whether Henry is truly out of control, or whether Ann provoked it in front of witnesses in order to gain sympathizers.

After that, Ann moves out and starts complaining that Henry doesn’t provide enough to support his daughter.  Eventually she marries a commoner with a white knight complex.  Henry cycles through a series of short-lived marriages, and enters into frequent rants about being cursed with a long list of crazy exes.  Catherine marries again as well, and this, her third husband, becomes the second great love of her life.  When she thinks of Henry, she can’t help but think of the great man she once knew who now seems lost forever.  But then she turns to her new husband and smiles in gratitude for her own good fortune.

At least that’s what I think will happen.  Don’t spoil it for me!
Posted by Breakup Watch at 4:22 PM